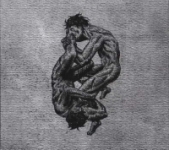 Since their last masterpiece "Fas – Ite, Maledicti, In Ignem Aeternum" really nobody can deny the fact that DEATHSPELL OMEGA must be named if it comes to the discussions of the leading Black Metal bands. The fact that they avoid the medial spotlight is creating a kind of mystery around them and so it’s only their music which can speak for them. The new release of the French band is a one track EP – and it’s their share to the split LP with their country mates S.V.E.S.T. The "Veritas Diaboli Manet In Aeternum" LP is a concept album but for everybody who’s not in the position to worship the good old vinyl both parts are also available as limited EPs (S.V.E.S.T’s part via End All Life Production). This EP is showing very clear why DEATHSPELL OMEGA is currently one of the leading acts. The band is in the position to summarize the essence of Black Metal in only one song. Very aggressive parts are standing next to calm moments which are living only through one riff and after nearly 20 minutes the song is finding its climax in a much reduced trumpet part- simple, effective and great. Think that only a handful of bands are able to create such a long true Black Metal song without losing control over the beast. So again an essential DEATHSPELL OMEGA release maybe in the wrong format (because I’m still addicted to my beloved vinyl) but still essential. www.noevdia.com