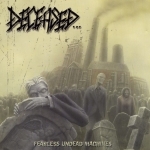 I became really hooked on an obscure American entity called DECEASED when they released their second full length album in ’95 titled "The Blueprints For Madness", a raw and dirty tour de force of thrashy Death Metal with a thrilling atmosphere and some quite catchy moments. Two years after that album, "Fearless Undead Machines" was released, an album that refined the style "The Blueprints…" manifested, 11 tracks of pure bliss, headbanging and Metal at its finest. Everything is taken a notch up on this album, the riffs are sharper, the guitar leads and melodies are spot on, the rhythm patterns tighter, the epic parts and catchiness much more present, and we almost get a Heavy Metal overdose once in a while (if it is possible to overdose on Heavy Metal?), the atmosphere is really gripping, and the vocals of King Fowley beyond this world, more haunting than ever. An album that blows you away from the first breath to the last gasp. And if you have to use spoken intros, sound from movies etc. to build up atmosphere, give this album some serious spins and learn how to do it tastefully, it works and gives the album and sound an extra dimension. Great to see this album ressurrected from the dead, pun intented, as it offers some of the best, if not the best material from DECEASED, a must have for thrashing Heavy Metal maniacs with a taste for undead beings and death. Enter the creek of the dead: www.facebook.com/pages/deceased-up-the-tombstones-official-band-page/309398579508, www.transcendingobscurity.com