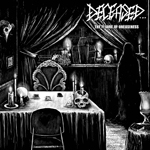 DECEASED / CONCEIVED BY HATE
The Figure Of Uneasiness / Below The Deck Of Opulence
(Morbid Skull Releases)
47:59min

These are definitely busy guys. El Salvador’s CONCEIVED BY HATE are pretty present during the last months. One release every year, whatever format it is. Now it is a split album, shared with none less than underground legend DECEASED and available only on vinyl. And it seems to me that since the day the vocal duties were taken over by guitar player Jorge Montesino, CONCEIVED BY HATE became more extreme. Their contribution to the split 7” with NUCLEAR already hinted on this. That mix of Death Thrash and Metal of the Gothenburg school that made their album “Pestilence Reborn” pretty interesting seems to be gone to leave more space for the extreme side of the band. With the opening ‘The Profitable Business Of Killing’ they already wield the axe. Not even two minutes of musical massacre that DEMOLITION HAMMER might not have done better. ‘Fuck Off The System’ even has a decent Hardcore vibe, not just because of the shouted chorus, but due to its overall attitude. A nod to the band’s past is ‘Skull Crush Brigade’ with some added keyboards for a little spooky touch. Finally CONCEIVED BY HATE pay their tribute to this records partners in crime with a thrashing cover version of ‘Planet Graveyard’. DECEASED are one of those two bands lead by busy underground legend Kingsley “King” Fowley and are around since the age of dinosaurs. This band is King’s vehicle to transport his passion for extreme Metal, varying from the Death Metal styled beginnings (“Luck Of The Corpse”) to more Power Metal fueled stuff, always spiced with this slightly odd note that is typical for his bands and makes them sound special. The contribution DECEASED made for this album doesn’t feature anything really new, since all of the four songs were already featured on some of their countless releases. But these versions of ‘Night Of The Deceased’, ‘The Triangle’, ‘Robotic Village’ and the fine ‘Cloned (Day Of The Robot)’ were recorded exclusively for this release. Done with the recent line-up live in the studio, they sound raw and pretty homogenous, even though they are from different ages. Personally, I never really was a big fan of DECEASED (and King’s Power Metal band OCTOBER 31 either), but they always delivered quality. Well, their first, Death Metal styled records weren’t that classy… So, if you always wanted to check out DECEASED, this split vinyl is a good opportunity, since it features some fine Death Thrash from CONCEIVED BY HATE as well. All further info at: www.facebook.com/conceivedbyhate, www.facebook.com/pages/deceased-up-the-tombstones-official-band-page/309398579508, www.upthetombstones.net