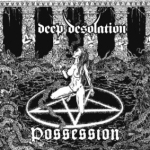 DEEP DESOLATION is another horde hailing from my homeland Poland, so I am always interested in the scene there and I try to check out the bands as especially the Death Metal scene is more than fruitful and brought us some really nice tunes during the last two decades. DEEP DESOLATION from Łódź are unleashing their third beast now upon mankind and the band’s style already was known as a mixture of several styles like Death Metal, Black Metal and Doom / Stoner Rock but on their current output the Stoner influences have been cut in favor of a nice bastard between Black and Death- / Doom Metal. The opener ‘Bestial Mind’ already shows their current direction and offers some frost-ridden, partly Scandinavian influenced Black Metal with some nice guitar tunes and solos changing between Death and Black Metal and some weird Arabic influences. This track indicates the overall direction of the full album which is a Black Metal release enriched by some Doom Metal, Stoner Rock and even 70s progressive Rock tunes. Apart from the well-known caws, even some clear singing appears on ‘The Wizard Of Overdose’. The fifth and last track ‘Divine Dance’ offers another fine symbiosis of Doom and Black Metal and is a well written track as the band manages to put both styles in a proper row and delivers some variety with that. All instruments are played very properly and are balanced very well. The only thing that bothers me a lot is the production, which is kept raw but in my opinion a better chosen and effected production would have fitted better to the current material. It is difficult to choose the best sound for a Black Metal release and there will always be people to criticize the production but that album has deserved some more fine-tuning soundwise. If I managed to make you curious now than go and check these Polish warriors out via the following sources: www.facebook.com/deepdesolation, www.oldtemple.com