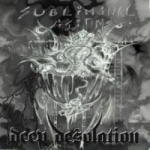 I’ve used quite a long time to come up with some words for this album, it hasn’t been the easiest task to get the essence of "Subliminal Messages" from the Polish doomy Black Metal band DEEP DESOLATION penned down. This is their first offering, that was released more or less together with their part of the "Chapel Of Fear" split, which I reviewed some months ago. Their material on said split didn’t impress me much, and the material on this album leaves me quite empty as well. As written the band has their base in Black Metal build on top of a base of Heavy Metal and doomier parts. So they take some melodic Black Metal riffing and a grim rasping vocal, seasons it with some rather nice guitar leads and a heavy doomy atmosphere, and some very grooving parts that collapses the atmosphere, and kills the drive and flow the music possesses. The Black Metal atmopshere never really kicks in and does not draw enough attention. The Heavy Metal parts and leads kill the doomy atmosphere that DEEP DESOLATION creates, and that is quite a shame. That said, the Heavy Metal parts gives us some really good guitar work, nothing fancy, though some good intense leads. And the groovy parts, they are just way off. I would personally like if the band went the Doom way as there are some good moments and some dark energy hidden in those parts on this album. Right now it seems like the band would like to go in too many directions, without tying the knots together to a whole, and that’s a shame, as it sounds like the members of the band have talent. the music works as a dark background painting, when not listening to closely and picky to the music, and it just quietly flows by. Though with all the good music released through time, do we have time or patience for such music in the long run? More info here: www.myspace.com/deepdesolationband, http://qevproductions.dbv.pl