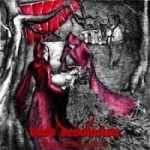 A year ago or so, I had the Polish band DEEP DESOLATION on my desk, it were the band’s two first releases, their debut full length and a split with two other bands from their area. Back then I felt the band was struggling a tad to find their own style and focal point. The worksome band is already ready with the follow up to "Subliminal Visions", which is blasting in my headphones as writing. The band has developed a bit since the last time I laid my ears upon them. The musical output is more focused, the base is still in doomy Metal intertwined with both Heavy Metal and Black Metal. Doom-laden Black Metal is laying the base and atmosphere, and the riffing is Heavy Metal inspired together with the guitar leads, though as it earlier was quite divided when the band did each part, they have now build the different inspirations into a more tightly knit experience. Atmospherically the band has moved, the atmosphere is dark and captive, musically the band has gotten tighter and delivers more quality in the songwriting and delivery thereof. Though if the album had been a few songs shorter, it wouldn’t have become too dull, as I’m afraid it does now, the music is a bit too repetitive for its own good. But damn, the band has gone from quite boring, though promising to quite good with more to come, so I am actually looking forward to follow these guys further venture in darkness, as "Rites Of Blasphemy" overall is a quite strong atmospheric album of darkened Doom, that I will listen to more than once in the future. More info at: www.myspace.com/deepdesolationband, www.myspace.com/darkzonepl