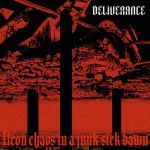 With their third album, DELIVERANCE from France make it pretty difficult for the auditor. Because actually it is not one, but two albums. So the decent listener is pretty much irritated, more than once I thought there are two different bands playing on “Neon Chaos In A Junk-Sick Dawn”. Maybe this approach is part of the band’s concept and basically I can approve the idea that art should not be easy to consume. But uniting two different styles on one album always harbors the danger that if you do not like one style, the whole album will be trashed. Four tracks of this album are Black Metal with some Death Metal influences and a special element, that sets DELIVERANCE apart from all the BEHEMOTH clones. And that is the heavy use of keyboards / synthesizer. And when I write heavy use, I mean heavy use. At some moments the description Industrial Metal is reasonably fitting. Even if some people stop reading now, for me it is still better and more interesting than all other boring and average Black / Death Metal releases nowadays. So far, so good. Besides the mentioned four song we have ‘Odyssey’ and ‘Fragments Of A Diary From Hell’, two tracks with a playing time of nearly 20 minutes, which make up more than half of the playing time. Both songs are actually no songs in the traditional meaning of songs, more or less some kind of soundtrack like pieces of music. For my ears less, because to me it sounds just boring. Any kind of tension or arc of suspense is simply missing. A band like LORD VIGO, for example, manages to record concept albums where the listener is able to follow the story, whereas here within the songs there is no construct recognizable. It is just a accumulation of different elements of Black / Sludge / Death / Industrial Metal, spoken words and weird noises without any inner coherence. To be honest, I was jolly glad every time the two songs were over and the band focused on what they do best: Black Metal with influences of Death and Industrial Metal. www.facebook.com/deliveranceband, www.facebook.com/ladloproductions