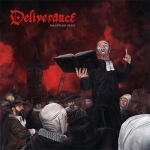 Hmmm… just wondering how many bands must be out there doing music under the DELIVERANCE moniker these days? The most known ones must be LA’s messengers of Christian beliefs and God’s word – as well as the British DELIVERANCE that released 3 studio albums in between the years of 1987 – 90 before calling it a day. This particular DELIVERANCE in question, however, comes far up from the north, Finland, and they play some sort of Heavy Metal that could be a mixture of such bands as SAINT VITUS, IRON MAIDEN, KYUSS, SPIRITUAL BEGGARS, DANZIG, SOUNDGARDEN – and especially early THE BLACK LEAGUE. In other words, if you are looking for tons of grooviness and heaviness in Heavy Metal, you will get a plenty of it on DELIVERANCE’s debut album "Relentless Grace", in one tight package. This record offers 9 songs that have been done under a great care – and that basically seem to find its responsive targets somewhat easily even. DELIVERANCE’s masculine-sounding, pretty straightforward and groove-infested Metal flows really nicely indeed, leaving many of us craving this type of stuff for more. They sound relaxed and dangerous at the very same time, and not forced one damn bit – and perhaps therefore the songs have got some much a potential, carrying ground below them, just to mesmerize the listeners – and to make them obey this band from a safe distance at least. In my opinion they hit true jackpot in such tunes as ‘Leper’s Hand That Feeds’ that is simply a sinfully catchy track as hell (the ending of the song is just superb) – and then in ‘Realms Of Delirium’, which is a pompously sorrowful and dark song, displaying overall all dark shapes of colors what this new Finnish Metal act is all about musically. "Relentless Grace" is absolutely worth checking out; one of those new bands I’ll keep my eyes out on in the future, no doubts. For finding more info about Finland’s DELIVERANCE, here’s the address: www.facebook.com/deliverance.fi, label: www.facebook.com/empirerecords.be