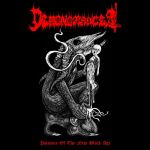 This is a compilation by DEMONOMANCER, a one-man band from El Salvador. If I got things right it features all songs ever made. Quite a good idea, because all previous releases were demo or split releases on tape so by publishing the whole work on both CD and LP (limited to 500 copies) Dunkelheit Produktionen gave DEMONOMANCER the chance to present their work to the public at large. Usually I dislike pigeonholing and discussing (in my eyes) stupid and narrow-minded terms like "real" or "true" (preferably written "trve") and suchlike. At the end of the days it is all about the music and whether I like it or not. But on this output the decent listener will find all in all 22 tracks, 22 tracks of pure underground Death Metal. If ever there was a band deserving the term underground than this one. The sound is reduced to a minimum, it is close to pure noise. You will not be able to find a single clean note on this output, even the short intros are distorted and blurred. Maybe due to the lack of good equipment or maybe done on purpose, but it simply fits for DEMONOMANCER’s mission to spawn hatred and malevolence upon the listener. If you imagine the worldwide Death Metal scene being a big house with different rooms, DEMONOMANCER are the ugly monstrosity hidden in the cellar (like possessed Henrietta in the movie "Evil Dead"). Musically the uncompromising full-throttle aggression of early KRISIUN, the grotesque deformation of AUTOPSY (their faster parts) and profane attitude of BLASPHEMY seems to be a big influence for J. Arden, the man behind this band. Although it is hard to spot differences between the songs it simply never gets boring, which means the songs have well worked out songwriting, which of course is hardly to recognize due to the distorted sound. But I don’t mind, since I always had a preference for Lo-Fi sound. Everyone who is still listening to old demos by nowadays well-known acts and everyone who thinks Death Metal was never meant to be pretty should instantly visit www.facebook.com/demonomancer-714953962009417 or www.dunkelheit-produktionen.de for more information.