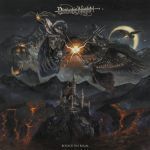 After some demos, singles and EPs, Germany’s blackened Speed Metal duo DIABOLIC NIGHT now comes across with its first full-length record, out via High Roller Records entitled “Beyond The Realm”. The title itself is a little bit misleading as the band doesn’t really manage to reach beyond any realm at all. Don’t get me wrong here, this is not meant as an insult or anything like that, but “Beyond The Realm” simply offers absolutely orthodox, and from time to time also pretentious, blackened Speed Metal – the German way of course. After listening to the record it’s especially the more melodic bands like WITCHING HOUR that come to mind as well as more primitive groups like NOCTURNAL or CRUEL FORCE. While I’m not a big fan of the latter, I especially appreciate the Heavy Metal epicism, that is also a big part of the WITCHING HOUR records after their killer debut “Rise Of The Desecrated”. However, while WITCHING HOUR still feature a certain kind of rancidness in their sound, DIABOLIC NIGHT appears as a very clean and well oiled machine that nails every note perfectly. Depending on where you’re coming from, this can be positive or negative. To focus on the material itself it’s important to say that the album features a lot of very nice lead guitar work as well as a bass that absolutely cuts through to set some accents here and there. The riff-work is absolutely teutonic with a lot of DESTRUCTION – ish hammer on / pull off fingering and noodling which immediatly evokes a feeling of earliest 83-84 Thrash. The sound is very mid-rangy and fits the albums character perfectly. I especially appreciate the lead sound which provides a certain kind of uniqueness. The bass is also very prominent in the mix (as mentioned above) and underlines the Heavy Metal pedigree of “Beyond The Realm”. The drums, unfortunately, are on the other hand a bit weak sounding, especially in the snare and cymbal department but that’s just me. All in all the songs can be described as a mix of fast riffs combined with more epic solo and middle parts. There’s also two instrumentals on “Beyond The Realm” which focus on the epic and melodic side of the band exclusively. My personal highlight on the record is definitely ‘Odyssey’ which features some great classical intro and outro (which you and I definitely have heard before) as well as a more neo-classical lead-guitar approach. The “ugly duckling” of the record, and another highlight for me personally, is the last track called ‘Descension Into Dying Spheres’ which exchanges melody with aggression and power. Its definitely the record’s fastest and wildest track with hammer-blasts all over the place. So in case of you being somebody who likes it dirty and nice at the same time, give this record a spin. If you’re generally into post-millennial German Black / whatever Metal, give this record a spin. If you like Metal in general – give this record a spin as well. Enough of the talking – just get your information via www.facebook.com/diabolicnight or www.hrrecords.de.