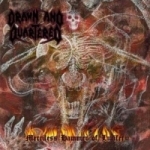 Does any of you Death Metal freaks still don’t know this four-piece cult act from Seattle (Washington)? If somebody answered yes, the only necessary thing to know is that this band is total IMMOLATION worshipping, with some traces of INCANTATION here and there. So, pure darkness, heaviness and brutality played with exceptional technique and, most important, a lot of feeling. After two intense albums (“Return Of The Black Death” and “Hail Infernal Darkness”), Moribund Records, their usual label, releases this new album. “Merciless Hammer Of Lucifer” gives us a new dose of DRAWN AND QUARTERED’s style, nothing more and nothing less, which is just great as a band like this doesn’t need any “evolution”. We have nine new tracks in a really brutal way, reminding of “Close To A World Below” from the NY gods, with a lot of fast parts alternated with the midpaced dark ones. A really harsh and very intense drumming (done by Dario Derna, who plays / played in ABAZAGORATH, EVOKEN, KROHM and FUNEBRARUM too) and that wall of sound the guitars and bass achieve, with dissonant and diabolical melodies, without forgiving the excelent vocals of Herb Burke, which give the impression of listening to Ross Dolan with a slight more guttural tone. If you get the impression now that this is nothing but an uninteresting copy of IMMOLATION, don’t get me wrong, as these guys are the only band (perhaps Spanish SCENT OF DEATH too) to get close or even to have the same feeling as them, as deep and intense, as dark and almost chaotic. This is nothing but another great piece of Death Metal from this horde. And if this is not enough for you, the first 3000 copies include a bonus disc with songs from different non full-length releases of their past. The first and third tracks (‘Bloodbath Communion’ and ‘Slaughter The Disciples’) come from an unreleased split EP, recorded in July 2003. The second one, ‘Vengeance Of The Unholy Inquisition’, is an unused bonus track for their second album, “Extermination Revelry”. The fourth one, ‘Predatory Strangulation’ comes from the same recording sessions as the two first ones I spoke about, and from the fifth to the ninth you have the “Crusaders Of Blasphemy” promo from July 2002, from which some tracks were used by Moribund Records for the “Crusaders Of Blasphemy” EP of 2002. So, nothing really new here, but a must for all worshippers of this band, nine tracks in the pure DRAWN AND QUARTERED vein and a bunch of really interesting bonus tracks. www.moribundcult.com