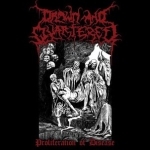 DRAWN AND QUARTERED is one of the best Death Metal acts around, no fuckin’ doubt about it. They never released anything weak nor mediocre. From their first demo until the latest opus "The One Who Lurks" every release was top-notch! Every? No, unfortunately not really every. The 2016 demo "Proliferation Of Disease" is an exception. Concerning the music everything is fine… the band delivered awesome, darkened and brutal Death Metal the way they always do but the production is crap. The demo sounds not just "not that good" or "the guitar sound is a bit weak"…. no, the entire recording sounds like a copy of a copy of a copy of a dubbed rehearsal tape by a Ukrainian Death Metal band from 1989. That’s so sad because, like mentioned before, the compositions are killer. Over the top Death Metal like expected. For me it’s just not a enjoyable to listen to those songs. When Frank asked for a review of "Proliferation Of Disease" I really hoped for something re-recorded, re-mixed, re-mastered or whatever but we’re talking here about the CD version from 2016, so it’s the original demo sound… too bad, really too bad. Of course you all should buy this because musical wise it’s a killer release. And we have to support one of the greatest Death Metal bands. More info at: www.facebook.com/drawnandquartered, www.facebook.com/vaultofdriedbonesofficial