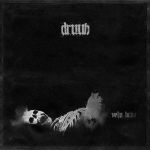 Latvia’s DRUUN are a rare breed. There’s a little bit of everything in their first full-length, “Velu Laiks”… Ancient Folk, Doom, Death, flutes, atmosphere and a little Viking mixed in. You may not bang your head while listening to DRUUN. You may not pummel an innocent bystander near the mosh-pit. You may not destroy the room you’re in. But none of that matters, as the band plant themselves into the fertile soil of an epic aural journey. The album begins with ‘Sakums’, a windblown, ambient introduction that leads into ‘Lien, Pelite, Pazeme’. The tribal chant-like vocals that open up the song merge into a dreary, doom-laden whirlpool of guttural vocals, staggering drums and sloughing guitars. ‘Vadatajs’ is another slow-burn that trudges its way into the burrowing caverns of total darkness. Much like the track before, it writhes like a calamitous worm, wriggling and inching its way into our skulls. Folky instruments (including a flute) permeate through ‘Velu Laiks’ until the drowning guitars punch their way through, before backing off to let the ancient sounds breathe. ‘Nakts Ragana’ is more of a slow, thunderous track as ‘Muzibas Dzislas’ is a faster-paced song, charging into the blood-strewn fold. ‘Neizvaditie’, with its Viking – like, tribal folk beginning turns into a fuzzy-guitared, smoldering heap of ash and devastation. ‘Beigas’ is a quiet segue into the final track ‘Under The Willow Tree’ (GRINDMASTER DEAD cover) that plods and plunders, while keeping the bizarre consistency of the rest of the album. This isn’t an album that’ll drain your energy. It’s more of an album where you sit back, flip on a red light in your mildly darkened room, maybe open the windows so a cool breeze whispers inside, and just become entranced in the album’s swirling haze. For more info, check out www.facebook.com/druunmetal, www.metalkalve.com