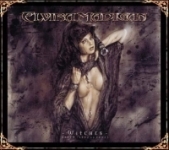 “Witches – Salem (1692 vs 2001)” is already the third full length by ELVIRA MADIGAN, a Swedish one man project lead by a guy named Marcus Hammarström. It is the follow-up to his self-titled (yet unreleased) “Elvira Madigan” debut and 2000’s “Black Arts” album (the latter featured most songs of the debut as bonus tracks and came out on his own founded label Northlore Records). For this new album Hammarström / ELVIRA MADIGAN (the name seems to be inspired by a Swedish movie, if I’m not mistaken…) finally got picked up by Black Lodge Records, who recently were responsible for bringing us the MERCILESS reunion record. “Witches – Salem (1692 vs 2001)” as well as its predecessor are both visually true eyecatchers as they feature the superb art by Luis Royo (www.luisroyo.com), and you definitely can’t go wrong by doing that! But does the approximately one hour of music also live up to that high standard? Well, it depends on what your personal musical preferences are. If you enjoy CRADLE OF FILTH, the epic side of BATHORY, BAL-SAGOTH, APOTHEOSIS (Malta) or moody soundtracks, you probably might be impressed here as well. Most parts of the album are very melodic and emotional, with a strong overall atmosphere, while the raw and aggressive parts are very close to what made CRADLE OF FILTH so popular. It’s actually quite scary how close Hammarström here and there comes to Dani Filth, in terms of his vocal delivery as well as the album’s harsh songwriting parts in general. Not very original, indeed – but then again, there’s this epic side to his creations which is way more varied and ambitious than most of the CRADLE releases. Plus there’s also a lot of clean, folky sounding vocals, which perfectly go hand in hand with the album’s relaxed elements. So, yes – after a few listens I finally learned to appreciate the complexity of this record and can only advice you to check it out as well, if you’re open minded enough for an exciting rollercoaster ride within the boundaries of such diverse genres as Black, Heavy, Folk, Epic, Gothic or whatever Metal. All further infos you will certainly find at the great ELVIRA MADIGAN website: www.elviramadigan.com