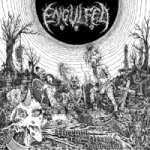 25 minutes of pummeling Death Metal from the netherworlds is what this Turkish band delivers on their first release "Through The Eternal Damnation". Low and brutal riffing, ripping raw melodies, blasting drums and a low guttural growl tearing rips in my sanity. ENGULFED is a bastard made in hell, a brutal combination of dark and brutal American Death Metal as INCANTATION and IMMOLATION, without the latter’s perfection of technical brutality, and Swedish darkness and atmosphere, mostly shown with dark melodies, some mainriffs and vocal parts. ‘Supreme Lord Of Blasphemy’ really does it for me, a nice mix of brutality and atmosphere, a dark gnawing intensity that keeps on getting heavier and more relentless as the song progresses. The atmosphere is the band’s strongest force as it is right now. The music have tendencies to repeat itself and sound close to other bands, but is kept alive and intense by the atmosphere that is immense. ENGLUFED do show some nice ideas and have the abilities to bring brutality alive with conviction, I look forward to follow these guys in their future ventures, as this is Death Metal up my alley, and as it only can become more grim and intrusive. Engulf yourself in flames at: http://hellthrasherproductions.bandcamp.com/album/through-the-eternal-damnation, www.hellthrasher.com