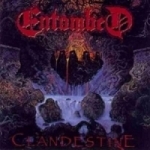 No one has greeted any of ENTOMBED’s post "Wolverine Blues" material with any noteworthy amount of fanfare. There were even a considerable number of people who hated "Wolverine Blues", arguably ENTOMBED’s most successful commercial release. Fewer still hated "Clandestine", but those people are in need of an MRI. "Clandestine" is so good, the very idea of it containig flaws is in doubt. Daniel Ekeroth, author of the much lauded book, Swedish Death Metal, devoted almost an entire page to the pet peeves he and many other fans have with the album. In particular, the vocals and tense tempos are what bring "Clandestine" down a notch. Again, however, this is entirely up to the listener, for "Clandestine" is universally liked even amongst its most vective critics. L.G. Petrov probably could have done a better job, but Nicke Andersson sang beautifully, and woe to any who say different. In fact, his singing had a distinct Hardcore edge, showcasing, if unwittingly, how indebted Swedish Death Metal is to Punk and Hardcore music. Even the most casual fan of ENTOMBED must know by now that the album credits Johnny Dordevic as the vocalist. This is untrue. For some reason or other, the band didn’t want people to know that Nicke had done the singing. "Clandestine" sported a much more polished version of the mid-range buzz saw sound ENTOMBED (or rather, Leif Cuzner) pioneered. Every instrument is clear, as opposed to "Left Hand Path", which can be somewhat difficult to decipher at times. As Nicke himself points out in Swedish Death Metal, "Clandestine" was heavily inspired by ATHEIST, the American band that released "Unquestionable Presence" the same year. "Clandestine" is nothing if not punishingly intricate. In that, the ATHEIST influence is all too apparent. However, ENTOMBED were far above copying their peers wholesale. This classic sophomore album of theirs stands alone, unequaled by the band, or anyone else. This re-issue also offers the "Monkey Puss (Live In London)" video on a free bonus DVD. It features five ENTOMBED promo videos (‘Left Hand Path’, ‘Stranger Aeons’, ‘Hollowman’, ‘Wolverine Blues’ and ‘Night Of The Vampire’) as well as the band’s 45 minutes set from the London Astoria on March 18, 1992 (which had been released as a CD in the past as well already). It is For all further info check out www.myspace.com/serpentsaints