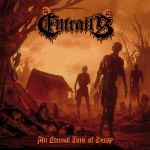 Even though ENTRAILS are around since the days Death Metal learned to walk in Sweden and had put out three very fine albums after they really started in 2008, they never really became a big name in the scene. Maybe it is because the revival of Swedish Death Metal receded almost ten years ago. But maybe it is also because ENTRAILS never left the boundaries that ENTOMBED, DISMEMBER and the likes set in the early 1990s. Listening to their seventh album “An Eternal Time Of Decay”, I saw two sides of a coin. On the one hand there is another nearly flawless album that revels in the glory days of old. But on the other hand I always had the impression that I wouldn’t have missed a lot if I never listened to “An Eternal Time Of Decay”. Before you get me wrong: songs like ‘Die To Death’, ‘Open Casket Feast’ or ‘Reborn In Worms’ are real fine songs, state-of-the-art Death Metal the Swedish way and definitely worth listening to. It’s just that they don’t have anything to add to the genre that no one ever heard. It’s even that I sometimes get the feeling that I heard a riff, a harmony or a certain part before. And I can’t deny that I like the older stuff from ENTRAILS better, especially the albums “Raging Death” and “The Tomb Awaits”. Yet anybody who is in need of a good Death Metal album of high quality won’t do wrong getting “An Eternal Time Of Decay”. So if you need more information, get it at www.facebook.com/entrails666 or www.facebook.com/hammerheartrecords