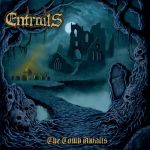 Alongside the new ENTRAILS album “An Eternal Time Of Decay”, their new label Hammerheart Records also took over the duties to re-release the band’s second album “The Tomb Awaits”. This one was originally unleashed in 2011 on legendary F.D.A. Records, in the times when Swedish Death Metal had its great revival. Back then this revival did not only carry me along with glee, it also had great albums to offer. “The Tomb Awaits” was one of these albums. What really enthralled me about this album was the absolutely true to the original reproduction of the sound and atmosphere of the early 1990s. The recording of the album sounded like it was done at Sunlight Studios by Mr. Skogsberg himself and the song writing was a superb nod to the old masters like ENTOMBED, DISMEMBER and numerous other old heroes of the glorious days. Yet despite the enthusiasm I felt about ten years ago, I haven’t listened to “The Tomb Awaits” for some years now. Thus this new edition was a fine reason to do so again. Well, time was a good friend of this album. With more than a decade on their back, songs like ‘Crawling Death’ (Übersong!), ‘Undead’ (with its nod to classic Metal) or the final ‘Unspeakable Obscenities’ (musically walking the ‘Left Hand Path’) still sound as fresh as they were back then. These three songs alone are really worth getting “The Tomb Awaits” if you haven’t got it yet, but the other songs are damn fine as well. Compared to the newest ENTRAILS album “An Eternal Time Of Decay”, these old songs still sounds much more classy and fresh. Nevertheless I’d like to complain about this re-release for sure, as it features nothing more than the original album. There’s no extra material, no bonus, nothing. If you own the initial version of “The Tomb Awaits” you won’t need this reissue. Maybe you might be interested in getting it on coloured vinyl, as there are three different colours to choose from. For more information, check www.facebook.com/entrails666 and www.facebook.com/hammerheartrecords 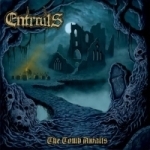 If you take a look at the list of rather ‘new’ old school Swedish Death Metal bands (MIASMAL, ZOMBIEFICATION, …) or ‘old’ bands who give it a second try (INTERMENT, EVOCATION, …), it’s really remarkable how mighty Sweden still seems to manage to deliver the goods like no other country. ENTRAILS managed to impress me a lot last year with their debut "Tales From The Morgue" as the band really managed to take the ultra-heaviness of old ENTOMBED and give it a sort of twist to create an own sound. If "The Tomb Awaits" would have been released in the beginning of the nineties, it probably would have gone unnoticed in the endless flood of releases. Twenty years later, it’s a totally different story, as you just don’t come across albums like these anymore. The drumming is very tight, the brutal vocals fit perfectly and the sound – Dan Swanö was responsible for the mix and the mastering – is just massive and very heavy. If you take a look at the logo and even the artwork of "The Tomb Awaits", it’s really hard not to compare them to their countrymates ENTOMBED which is not a problem for me. What’s even more fascinating is really how close ENTRAILS get to the classic Sunlight-sound and – as we already remarked – managed to make it their own. A track like ‘Crawling Death’ is a perfect example: in theory it would have fit perfectly on an album like "Clandestine". Nevertheless, ENTRAILS once again come up here with these ultra-heavy mid-tempo parts which have become almost already their trademark somehow. Besides the brutality, ENTRAILS also always manage to keep their songs very melodic – ‘Undead’, with the beautiful instrumental part in the middle is a very good example – which is also a very good thing in my book. Next to all this, they also know how to write devastating riffs – just listen to the opening of ‘Collection Of Cracked Heads’ – which makes you really want to blow your speakers. To keep it short: "The Tomb Awaits" is an excellent follow-up to their debut and very much recommended to all those who still adore the old releases of NECROPHOBIC, ENTOMBED, DISMEMBER and such. Cool release! www.myspace.com/entrailsreborn, www.fda-records.com