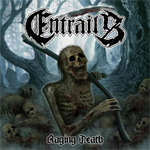 Since all their previous stuff was already reviewed on this glorious site, I don’t waste my breath on the history of ENTRAILS and switch directly to the present. After two extremely fine albums for the always dedicated F.D.A. Records label ("Tales From The Morgue" and "The Tomb Awaits"), Metal Blade now is in charge for the resurrected Swedish Death Metal monster. "Raging Death" marks the third album of ENTRAILS, the so called "make it or break it" album and with a big Metal label and this album in the back, I’m sure they will "make it". I still wonder why they had to wait for the recent revival of Swedish Death Metal to not only release one or another fine album but also to get really started like this. Their first two albums are brilliant examples of (un)modern, yet typical Swedish Death Metal the way it has to be. Now "Raging Death" follows the path ENTRAILS started to walk, in an even more perfected way. Dan Swanö is the man who once again did a fantastic job in mixing / mastering this album. ENTRAILS are still nothing else than a Death Metal band in the tradition of ENTOMBED, DISMEMBER and the legions of band that haven’t become that popular. But after their raw and unpolished early offers, "Raging Death" sounds a little more clean and polished. Songs like the opener ‘In Pieces’ or ‘Bloodhammer’ are great Death Metal steamrollers and ‘Cadaverous Stench’ even has the potential to become a Death Metal hit, thanks to the catchy shout-along chorus and the melodic solos. My personal fave ‘Death League’ is a brilliant song in the melodic tradition of DISMEMBER with some prominent guest vocalists such as Kam Lee, Jörgen Sandström, the inevitable Rogga and Dan Swanö himself. ‘Chained And Dragged’ even goes a step further into catchiness as far as the guitar harmonies are concerned. Only the final track ‘The Cemetery Horrors’ leaves a question: is the end is meant as a tribute to ENTOMBED’s masterpiece ‘Left Hand Path’? But the lesson is clear: there can’t be a closer combination of "mainstream" and pure old school Death Metal than "Raging Death". For all those die hards and collector maniacs, the digipak comes not only with a redundant cover of MARDUKs ‘Dark Endless’ (like the vinyl edition as well), but also with a bonus CD called "Hell At Party San 2012" (which should explain the above mentioned total playing time – Frank). On this disc you’ll find the whole show the band did at this festival, eleven tracks in all. The focus at the show was put on the second album "The Tomb Awaits" of which seven songs are featured here. The sound quality is pretty good of course, but the atmosphere is a little weak. But I don’t want to criticize too much on this recording, it’s just a bonus. See it as a nice way for new ENTRAILS fans to check out band classics like ‘Blood Red’, ‘The Morgue’ or ‘To Live Is To Rot’, though. But I’d always prefer the album versions anyway. If you haven’t checked ENTRAILS out yet, do it now: www.facebook.com/pages/entrails/115745905237, or visit www.metalblade.com