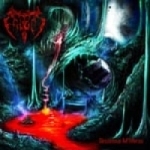 So, Greek band EVEROS is being described as ‘a great combination of Black / Death Metal in the veins of DISSECTION and DEICIDE’ by some label guy. Well, I don’t know why on earth these two band comparisons in question are given to us because there’s absolutely nothing in EREVOS that could link them either to DISSECTION or DEICIDE. This stuff is mostly partly a keyboard-laden, symphonic Black Metal – and the closest comparison to EREVOS might be such names as Norwegian COVENANT and whatnot, Finland’s exclusive Nuclear Metal warriors IMPALED NAZARENE. There’s actually much more common in them to those two latter mentioned bands that one could think of at first. Keyboard’s presence on the album brings in a pretty nice and welcome feeling for EREVOS’ spacey and atmospheric Black Metal, in which of course all the other instruments also play an equal role as well, to create the kind of solid wholeness which these Greek Black Metallers can be somewhat proud of. "Descensus Ad Inferos" is just their debut album although the fact is EREVOS was formed in the fall of 2004 already. Then again, as we should know, it takes years and years for some good wines to reach that perfect taste, so obviously the guys have been far-sighted enough and let their stuff come together for their debut full-length in small portions before entering the studio to do the actual recordings for it. Some parts on "Descensus Ad Inferos" sound pretty generic and even amateurish, but for the most part EVEROS have done a decent job as far as the album’s 11 tracks are concerned. This stuff is nowhere near any technically demanding elements that can be found from the Norwegian COVENANT’s "Nexus Polaris" album – and in sheer intensity and aggression they are no match to IMPALED NAZARENE either. But EVEROS is somewhere there in between, I guess. It’s kinda surprising even how EVEROS’ vocalist, using an alias Growler, has this slight tendency to sound like Mika Luttinen from IMPNAZ. He’s got a fuckin’ wicked voice. Nevertheless, as said, as for EVEROS’ debut album, they have done a good job altogether. Band contact: www.everosblack.gr, label: www.myspace.com/orkestralpromenadeproductions