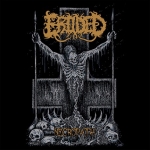 It can not be denied that GRAVE left a huge impact on the worldwide Death Metal scene. No less than four bands named themselves after their song ‘Eroded’, with three of them releasing records. The longest lasting of them are the German and the Italian ERODED, both active for nearly fifteen years now. Since the German ERODED are pretty lazy as far as releasing records is concerned (only three split 7”es to date) it’s up the the Italians to spread the name. But it took the duo from Alessandria in Piedmont also quite a long time to release a follow up to their first full length “Engravings Of A Gruesome Epitaph" from 2012. It’s six years later now, the second album “Necropath” is unleashed, and it is even out on F.D.A. Records, a label that often proved a very good taste in releasing damn good Death Metal. And this ERODED album is not an exception to the rule. From the first notes of ‘Eternal Warspate’, this album breathes the spirit of old school Death Metal. The riffing is very mighty without being revolutionary in any way and the speed is often subject to change. In comparison to its predecessor, the sound is much more forceful and adds a lot to the intense and dense atmosphere of the songs. Musically, ERODED are of course not the re-invention of Death Metal. Yet “Necropath” is an expedition through all classic schools of Death Metal, focusing on the European and especially Swedish style. Thus we have a pretty unique blend that really satisfies my need for real Death Metal with highlights like ‘Throne Of No Return’ that reminds me of the atmosphere of early MORGOTH or the monstrous ‘Of Graven Blood On Earth’. If you’re into Death Metal, you will surely love “Necropath”. Check out www.facebook.com/erodeditaly or www.fda-records.com for more.