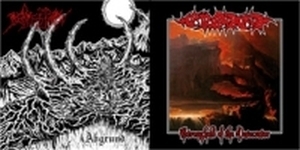 Back to good old adorable vinyl again! Germany’s Death Grind veterans DEPRESSION are back after a nearly three year long break and share a 7" with their neighbors ERODED, who have been silent for a similar time as well. And they are back with a blast! DEPRESSION are around for nearly 25 years and nearly as much releases now, deeply rooted in the underground. And so this is the first time that I hear of them. But it is no surprise to see that their main influences can be found in old 1980s Death and Black Metal. Some of the riffing reminds me of SLAUGHTER, especially on the fantastic ‘Grotesquely Distorted’, and HELLHAMMER, since DEPRESSION share their ability to use simple, but effective riffing, without any needless frills and furbelows. Mix these influences with early CARCASS and the first GENERAL SURGERY 7" and you might figure out, how DEPRESSION sound like. To garnish that, they even afford themselves the luxury of three vocalists: aside from lead vocalist Ron, Kai and Marc are also in duty of some growls and backing growls. Yet they are far away from being copycats, since they found a brutal way to find their own style: simple, sometimes even primitive (in a good way) and not always full throttle. DEPRESSION know when they need to use slower parts and breaks to create an exciting Grind machine. And they know when it is time to pay tribute to the masters. Their side of the EP features a cover of DEATH’s ‘Torn To Pieces’, which is sadly not much more than a tribute. It’s the only thing I have to criticize about "Abgrund". Check them out at: www.depression-grind.de or www.facebook.com/depressiongrind. On the other side, we find ERODED, not to be confused with the identically named bands from Italy, Spain or Japan. Up to now, they only released a demo and two more split 7"es with PAGANIZER and DECREPITAPH, making this EP their third split in seven years. But despite the fact they haven’t released much material until now, they offer great quality here. Their two songs make this 7" a total must-have for any old school Death Metal lunatic! ‘Stronghold Of The Desecrator’ (their title track) and ‘Dobermann’ are excellent raging tunes in the vein of Swedish heroes from those good old times, like CARNAGE and NIHILIST. Very simple, yet not free of melodic moments, driving, fast and furious. The raw production fits perfectly. My first new discovery in 2013 and the first definite highlight as well! Can’t wait for an album to come out, but if I look at the amount of stuff they released, I fear I have to wait a few more years. Let’s hope for the best… More about this great band at www.eroded.de. You should also visit the label on www.facebook.com/sufferprod or contact them at: marc2412@gmx.net.