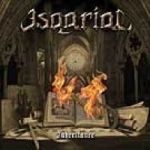 As you can easily find out yourself, Edouard was already quite impressed by ESQARIAL’s previous, second release "Discoveries", putting this Polish act in the tradition of technical Death Metal masters ATHEIST, CYNIC or NOCTURNUS. Well, to tell you the truth, when I started listening to the first couple of tracks on this new effort, I was also pretty much blown away by the band’s sheer musical brilliance and excellent production of this album. It all reminded me a bit more on late DEATH and partly also on newer MORBID ANGEL, but hey – it was nevertheless quite obvious that these guys are extremely skilled in what they do. Even the comparison that the leads have a certain Joe Satriani feel to it were pretty accurate as there’s some incredible guitar work to be found in the eleven featured songs. Not necessarily exclusively limited to the Joe Satriani style, but always in this so called guitar-hero league (Vinnie Moore, Tony MacAlpine, Steve Vai… you name it!). What really turned me off after a while though are the vocals, which kick off very convincing, but from my point of view become weaker throughout the album’s playing time. Haven’t heard the previous album myself, but from what Edouard mentioned, they are definitely not sounding as brutal anymore, they are actually a lot more in the Thrash Metal vein nowadays, partly even with cleaner parts. I don’t think that’s the right way to go, as there’s already countless of technical Metal acts out there, but only very little really brutal Death Metal bands that deliver a same quality. And the Jimi Hendrix cover ‘Fire’ was also quite unnecessary as it simply doesn’t fit into their very own musical style at all. So, both thumbs up for the instrumental side of this new effort, but not exactly for the vocal delivery. Still a very cool act to keep an eye on. All further info you may get here: www.empire-records.com.pl.