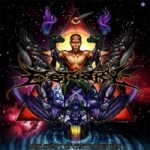 What a roster Ibex Moon has these days, eh? I remember when this label was just a passing thought, and idea of John’s, something he was gonna do y’know.eventually. Time passes and now several of his company’s titles have made it across my desk and look how far he’s come with this idea! Amazing! Here then is yet another one of John’s fold, a thrashing Death Metal act hailing from Cincinnati, Ohio and sounding nothing like any band that I have heard from that city. Reminiscent of a more technical DEFLESHED or a heavier KING’S EVIL in many ways, yet with a brutal Death Metal edge to their writing and a like minded vocalist (who happens to be female if you care?) vomiting over the top of generally mid tempo to somewhat fast paced songs. Ten tunes in number are given here, with a wide range of lyrical content that appear to be well written and crafted. Almost seems a shame that such words go forth from a puke blower, kind of like how INTERNAL BLEEDING used to be before they kicked out their first singer Wallace Milton. However, what was I to expect as the vocalist rocks an ANAL VOMIT shirt, hahaha, in one of the band’s photo shots! Anyhow – moving on.The layout and packaging of this album is really a site to behold! A total color six panel digi-pack and color enhanced CD, complete with inner liner notes / lyric booklet also as well all in color, with clear band photos, and cool extra artwork throughout. The only thing missing from this album is a hidden bonus video track! Next time, huh? Contact: 7321 Hickman St., Cincinnati, OH 45231 USA or www.estuarymetal.com, www.ibexmoonrecords.com