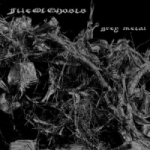 FILE OF GHOSTS
Grey Metal
(self-financed)
35:28min
FILE OF GHOSTS is a one-man army from Finland – and an ambitious fellow named Sami who’s responsible for all the musical perversions behind his extreme Metal band or project, has now recorded his debut full-length album, titled “Grey Metal” – including 7 tracks. This is a low budget release, in which Sami has produced the whole thing by himself, played all the instruments alone – and even programmed the drum parts into the songs. The anatomy of his music is interesting, too. Sami has combined several styles together into one big extreme style of his own visions. Both Black and Death Metal are the 2 heavily dominating genres within this record, but there’s also a fair amount of Grindcore mixed in, basically just adding a more vicious and dangerous tone into the songs altogether. For what this is, I think Sami has done a great job, keeping in mind he considers FILE OF GHOSTS as his ‘hobby band’ only. Naturally with a better – real studio production, he would be able to bring things on the next level, allowing him to get that ‘extra punch’ to his songs to crush a couple of ignorant extra skulls perhaps, so to speak. ‘Praying Mantis’ and ‘A Lie’ are also the kinds of songs off this record (hostile, oppressive, ultra-heavy and simply tastefully and really well composed) he should seriously use as examples to develop FILE OF GHOSTS’ future material for his next release. But while waiting for it to come out, by all means sink your teeth into this extreme and murky beast. www.myspace.com/fileofghosts
Luxi Lahtinen