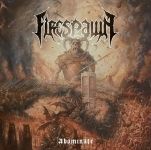 The line-up for Sweden’s FIRESPAWN sounds like a Metal Hall of Fame inductee list. You’ve got ENTOMBED A.D.’s L-G Petrov on vocals, ex – ENTOMBED A.D.’s Victor Brandt on guitars, UNLEASHED guitarist Fredrick Folkare, NECROPHOBIC’s Alex Friberg on bass and Matte Modin (also from NECROPHOBIC) on drums. This seems like a sure-fire winner to deliver their third Death Metal full-length. These guys have been around. And they’ve developed their own style individually, which can be recognized by knowledgeable fans. ‘The Gallows End’ opens "Abominate" with a thumping bassline and tribal drums while the guitars bleed and stutter and the vocals growl and gurgle. There’s no fucking around. The band’s about business. ‘Death And Damnation’ is a furious mixture of scathing riffs and rapid drumming. Here’s a confident band, due to their multitudes of bands and skill between them. ‘Abominate’ is a sauntering beast stalking its prey as ‘Heathen Blood’ is a whirlwind of screeching banshees. The muddy guitars tremble and vibrate like a fucking buzzsaw in the fifth track ‘The Great One’… solid proof that a mid-paced song can devastate the eardrums as much as a fast-paced track. ‘Cold Void’ is an acoustic number that segues into ‘The Hunter’, a more epic-sounding song that shifts and u-turns as it thunders on. ‘Godlessness’ is a more simple track, but just as effective as any other, as it barrels into a destructive pace a little ways into it. The band throws out a more traditional blast of Death Metal sonic voracity that remind us that the past is never really gone. The tenth track ‘The Undertaker’ continues the ferocity as ‘Black Wings Of The Apocalypse’ book-ends the album with a song that could easily have opened the album, it’s so good. If you’re a fan of any of the members’ other bands, you’ll easily get sucked into the energy and domination that is FIRESPAWN. They take no prisoners in their Metal war. For more information, check out www.facebook.com/firespawnofficial, www.centurymedia.com