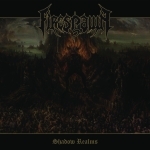 We are getting close to the end of 2015, lots of things have happened this year, from chaotic events to hopeful better days. During the first quarter of the year, Century Media announced the closing of their US headquarters (moving the stock to the new owner and partner in crime Sony Music), so lots of releases passed by without any proper advertising and marketing campaigns, while this marketing strategy was moving forward lots of records were stuck in between. Among those "pending" releases that were listed but their future was uncertain FIRESPAWN was probably the most interesting and promising. The elite of the Swedish Death Metal playing in one band for the first time, decades of knowledge and skills merged under one banner. The expectation was high, and while the release of their first full length album was pushed to the end of the year it made the anxiety to rise up even higher. So what does FIRESPAWN has to offer that none of the other thousands of bands that emerged during the last 8 years of the old school Swedish Death Metal revival has? The answer is plain and simple… absolutely nothing new here, which could be a good and bad thing at the same time. You have 5 iconic members of classic bands putting ideas together and paying this sort of tribute to their hey days but with a slight sense of freshness added to the mix so it could sound different to what they do / did on their principal bands (mostly, I mean freshness in the sense of the overall production, not the execution). But there’s one rule of gold that applies perfectly here, like a glove, "Old dog doesn’t learn new tricks." So when you have members of UNLEASHED, ENTOMBED (AD), NECROPHOBIC and DEFLESHED among the ranks, you know what this band will end up sounding, exactly like a mix of all those bands. So enough with the useless info, let’s tackle this album. You have Victor (ENTOMBED) and Fredrik (UNLEASHED) in the riffing department, meaning the album is plagued with slow to mid-tempo melodies mixed with rhythmic catchy riffs played during the chorus and the classic solos played by Fredrik as he usually executes them in UNLEASHED and NECROPHOBIC towards the end of each song. Then you have Alex (NECROPHOBIC) playing the bass, and it sounds tight and very present through the whole record, almost like a third rhythmic guitar with a very low vibe which makes the album sound more brutal. Matte (DEFLESHED / SKINEATER) plays as usual, with such a precision it’s almost ridiculous, I mean this guy is a beat machine, he plays everything from Hardcore, Punk to raw filthy Death, Black and Thrash, however I think the band could have used him a bit more to give this project a trademark sound instead of making him go with the basics. Now… Lars (ENTOMBED) I think he’s the weakest part of this project, doing the exact same thing for the last 15 years, nothing new, nothing fresh, just the same performance and attitude, like I said before it could be great for some, but for me, I was expecting a bit more from him. Now the bottom line, is this album good? Is it bad? Is it average? Well I think this album can be described as a very controversial record, as I know people that will love it to death and probably even vote it among their top 10 for 2015, but there’s also people I know that will probably stop listening to this record after the second track. Me? Well, I’m biased right now, I don’t know what to think about this album. It’s like a good old friend, that is there for you and will always be there, but every time you visit him and talk to him, he will talk about the same things over and over again, trying to revisit the past. I think there’s some nostalgia flowing over "Shadow Realms" but I think this album is more for the purist and all time followers of this guys, than for new people exploring new acts or projects searching for something new and fresh. So, in a nutshell, you know exactly what you will hear if you buy this album, good solid old school Death Metal, full of groove parts and bashing moments. Buy this album yourself and make your own choice, you can get it by visiting www.facebook.com/firespawnofficial and www.centurymedia.com