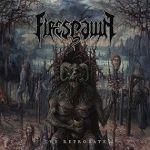 This band used to be called FIREBORN and they changed their name to FIRESPAWN in 2015 and this is their second release. The band also consists of ex – members of bands like ENTOMBED A.D., UNLEASHED, NECROPHOBIC and DEFLESHED. I admit I am surprised that a fast and furious Death Metal band is on Century Media Records these days cause after about 10 seconds FIRESPAWN just hit me like a tank! This is some wicked and speedy Death Metal that doesn’t sound like a million other generic Death Metal bands. The guitar riffs do get a bit flashy as times, but that is ok as the riffs and song structures are spot on and they are also catchy as well. The band does slow down at times to let you catch your breath, but for the most part this is up tempo and fast stuff. The vocals are in the Death and Thrash range and sounded good to these old underground ears. The flashy guitar solos and stuff never go over the top and the singing is intense and I can feel it as he spews out the vocals. With so many (and there is a lot) generic Death Metal bands out there, these guys are like a breath of fresh air. For more information check out www.facebook.com/firespawnofficial or www.centurymedia.com