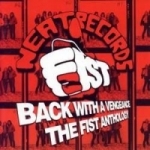 FIST
Back With A Vengeance - The Fist Anthology
(Castle Music / Sanctuary)
128:41min

FIST was a part of the New Wave of British Heavy Metal movement that spawned big names like IRON MAIDEN and DEF LEPPARD but unfortunately FIST’s career success failed to match with these bands by far. Originally formed in 1978 under the moniker AXE with the line up of vocalist / guitarist Keith Satchfield, guitarist Dave Irwin, bassist Dave Durey (soon to be replaced by John Wylie) and drummer Harry "Hiroshima" they recorded their first single, entitled ‘S.S. Gyro’ in September of the same year (btw: this version of the song opens up this double CD compilation). In 1979 – after a short break up – the band resurfaced with the new name FIST (and the aforementioned new bassist). FIST’s first single "Name, Rank And Serial Number" (coverart by VENOM’s Cronos aka Conrad Lant) from 1980 was their first release on the legendary NWOBHM label Neat Records. Enthused by the success of the single MCA signed FIST as part of a three band package deal with Neat – labelmates TYGERS OF PAN TANG and WHITE SPIRIT. Another single called "Forever Amber" was released before FIST delivered their full-length debut "Turn The Hell On". Unfortunately the album was not received well by fans and critics and so MCA decided to drop the band from their roster. FIST returned to Neat Records and made a drastic change in their line up replacing frontman Keith Satchfield with former HOLLOW GROUND singer Glenn Coates and rhythm guitarist John Roach (ex – MYTHRA). Apart from that new bassist Joe Appleby was added. The line up change also had a major input on FIST’s second album "Back With A Vengeance", since it was much cleaner and more melodic than its predecessor. Unfortunately their fans did not appreciate the style change and so FIST’s last single was a cover of DION’s ‘The Wanderer’, but since they didn’t manage to achieve any success with this desperate attempt, the band soon after called it quits. "Back With A Vengeance – The FIST Anthology" consists of every song the band ever recorded (many of them in alternate versions) along with a great booklet, many photos, a history and a discography this double CD package pays perfect tribute to one of the more overlooked NWOBHM icons. Another great Castle reissue well worth spending your hard earned cash on. If you were impressed by FIST’s comeback concert at Germany’s Headbangers Open Air Festival in 2004 – this is the album to get.