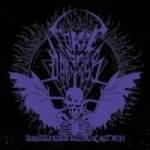 Weird that this album has stayed quite unnoticed since its release in 2010. Especially when it was one of the most intense albums that year. Many of you might not be familiar with these guys, so here’s an introduction of this Chilean occult trio. They started in 2002 and released two rehearsals before recording a live-album "Live MMIV" in 2004 and the self-titled debut in 2006, both on Proselytism. In 2005 they participated on the "Outbreak Of Evil Vol. 2" compilation on Nuclear War Now together with ABIGAIL, VILLAINS and MIDNIGHT and in 2007 they shared a split EP with BESTIAL MOCKERY on Turanian Honour Productions. Bassist / vocalist Nabucodonosor III is also part of HADES ARCHER nowadays and drummer Nercohell has played in AMMIT. "Darkness Revelation" is released on Genuflextion. This is three quarters of furious Black / Thrash, with a strong and familiar atmosphere from the classic nutrition of MAYHEM, SARCOFAGO, BATHORY and POSSESSED. Their uncompromising blasting style is pretty much in the line of WAR, SLAUGHTBBATH, CHAINSAW, BESTIAL MOCKERY or EJECUTOR. But more than these bands, where the rest is heavily inspired by VENOM and BATHORY, FORCE OF DARKNESS infiltrates the power of classic German Thrash. This works fresh like a bloody charm! On top of that, the production is for a great deal responsible for a excellent old school sphere and one of the best I’ve ever heard. It sounds old and new at the same time; loud and clear with a natural resonation. An excellent job by Dm6 Studio (also MAGNANIMUS, WRATHPRAYER, UNAUSSPRECHLICHE KULTEN, COMMUNION). Every instrument is distinguisable and the balance is perfect. Between the slashing riffs there’s an occasional surprisingly melodic solo (also on bass) every now and then, which helps the process even more. A notable detail is that the bass plays a significant role in the music of FORCE OF DARKNESS and snores as possessed as on MARDUK’s "Opus Nocture". Very effective next to the shrill wall of guitars. The eleven tracks are all well-composed and before the concentration tends to drift in the end, the forelast incantative track ‘Buer’ takes it back with a long bass prelude. To wrap this up, you should NOT miss this one. The time stands still on this one with late eighties on the counter. It’s furious, it’s tight as hell and as hauntingly pure as only the originators have done this before. The label has no official website. Not anymore at least. And the CD only mentioned force_of_darkness666@hotmail.com and FORCE OF DARKNESS, P.O. Box 17, Santiago 58, Chile as address. Can’t tell you if these are still active. Check Youtube for samples and your well known underground distro for a copy. Also keep an eye on other excellent Black Metal that Chile is producing lately.