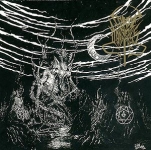 Chilean premium Thrashers FORCE OF DARKNESS are around for a long time in the extreme Metal underground. The three piece started in 2002 and up to now have ten releases in their discography, lots of small stuff and also two full length releases. The first, self-titled album originally saw the dark of night in 2006 as a digipak, limited to 1000 copies on the small but dedicated Chilean Proselytism label. Now Iron Pegasus gave “Force Of Darkness” a proper re-release to feed the need for speed. Okay, that’s a bad play of words, but a fitting one though. FORCE OF DARKNESS were far from being slow, far from being lame and far from being wimpy on their debut already. Instead, they presented us a mountain of simple blackness and brutality the old masters of proto Death would have been proud of. Yes, this album might have been released in the mid of the 1980s exactly like this. And damn sure, if that happened, “Force Of Darkness” would be one of those timeless classics everyone still loves and worships. After the short intro ‘Ascension In Morbid Talionis’, the opening ‘Valley Of The Dead’ already sends greetings from early POSSESSED and KREATOR. And it goes on like this for some fine 45 minutes of pure musical massacre. Be it the infernal ‘House Of Baphomet’, the pretty long orgy ‘Beast Carnage’ or the crushing ‘Aeon’ – all hits and no miss. And the second half of the album walks that path as well, including the fantastic ‘Whore Of The Untamed Flame’ and ‘Blood In The Skies’, that even features a chorus in early DARK ANGEL style. In the end, the short ‘Touched By Astaroth’ is even pulling teeth and has a nice touch of SACRILEGE B.C. therefore. But it just opens up for the final ‘The Cult Of Asmodeus’, the second longer merciless massacre on this album. To sum it up: If “Force Of Darkness” would have been the follow-up of “Seven Churches”, nobody would have been disappointed. www.iron-pegasus.com