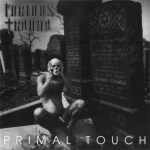 Get ready for a journey back in time, a journey into the forgotten history of European Thrash Metal. The Danes FURIOUS TRAUMA were around for roundabout a decade since their foundation in 1988, but never blew up dust. And falling into oblivion is not very pleasant, especially when there were musicians in the line-up that received merits in bands like ARTILLERY, KONKHRA, PRETTY MAIDS or MERCYFUL FATE. Sounds like the “who-is-who” of Danish Metal, huh? So, let’s start to investigate the causes why a band like this got covered with tons of dust. One reason might be the fact that nearly all FURIOUS TRAUMA releases were executed by really small independent labels. Another reason can be found in the times when they were around. When the first album “Primal Touch” came out in 1992, the times of Thrash Metal were over, Death Metal blew away the thrashing rage some years before and the new era of modern and grooving Thrash was right at the door. So "Primal Touch" sounded like an anachronism when it was released already. The not to striking production was not really helpful either. And now let’s face the most important fact: FURIOUS TRAUMA had absolutely nothing special. “Primal Touch” sounds like a collection of riffs that somehow seem either very familiar or random, combined with vocals too exchangeable to remember. Even in times when Thrash Metal was all the rage, this album would have been neglected and forgotten. So, I honestly ask myself who should buy this recent re-release of the album? Maybe it was for a good reason that it was limited to 100 handnumbered copies in a digipak CD – these might sell. Or someone remembers the old demos of FURIOUS TRAUMA, who are compiled on a second CD. Especially the four tracks from "Tempora Mutantur", originally from 1988, are pretty interesting, since they offer fast Thrash Metal with sometimes quite chaotic rhythms and a hint on bands like SADUS or HEXX. Especially the programmatic ‘Thrash Yer Guts Out’ is a very fine one. These songs are the only ones recorded with original singer Klaus "Hyr" Hansen, who left the bands after the demo and guitar player Lars Schmidt took over vocal duties as well. The other demo "Profit Counts" from 1990 already showed the random direction the album took two years later and therefore these seven songs (none of them, made it on the album either) are as negligible as the album. So, in the end it’s the four songs of "Tempora Mutantur" who might serve as an argument to buy this double CD. Not that much, eh? More info at: www.gsp-music.com, http://gsproduction.bandcamp.com