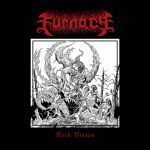 Sweden’s Death Metallers FURNACE have returned with their sophomore effort and only months after their debut album was issued. I’m not sure on the full back story but either way these guys sure have been putting in the work to crank out 2 albums about 3 months apart. The band plays an interesting style of Death Metal that reminds me more of a Death’n’Roll type style with a hint of Goth Rock in certain parts. It’s a very unique style but something that I really dig. The party gets started with the fun track ‘Suburban Nightmare’. A solid track that reminds me of the 90s era Gothenburg / Sunlight Studios sound and one that I really enjoyed. No 1000 bpm drums but rather a nice blend of musicianship. ‘The Other Ones’ follows up and this time the band picks up the tempo a bit making this a more thrashy style jam that again does deliver. ‘The Calling’ brings a bit of a Black / Death melodic sound and takes things in a different direction with harmonized vocals in certain parts of the song. ‘Escape’ and ‘From The Blackest Void’ bring further the atmospheric melancholy the band exhumes of their music. The 4 songs that really stand out to me on this album are ‘Yog-Sothoth (The Key And The Gateway)’, ‘94 Bloch Lane’, ‘Eve Of Triumph’ and ‘Trapped’, which encompass what the band brings to the table. Especially the latter as it is full of Speed and Thrash that you just can’t help but bang your head. ‘Another Ending’ has the same songwriting as ‘Suburban Nightmare’ at the intro which I thought was interesting as it could have easily been called ‘Suburban Nightmare’ pt 2. These dudes crank out some fun jams that I can honestly say kept me vested in the music. Every track was unique and you can tell one track from the next. I’m still very surprised that they dished out 2 albums in less than 3 months but I might not have all the back story (possibly they had an album’s worth of material sitting around until they got a record deal or maybe they did just work hard and spew out 2 albums worth of material). This was a fun album and I would highly recommend to anyone that just wants to jam out to some solid tunes. For more information please visit: www.facebook.com/blackstonechurch666, www.facebook.com/soulsellerrecords