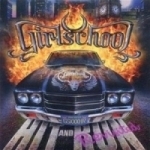 Wow! It really has been 30 years already, since these British rockers released their best album ever: "Hit And Run" in 1981. When I, as a teenager, got my fingers on it in the mid 80s, I totally fell in love with this album… I loved the Punk influenced energy, the songs and the vocals and still do. Hell yeah, I still listen frequently to "Hit And Run". So I was not very enthusiastic when I heard that GIRLSCHOOL would release a re-recording. I’m not a friend of re-recorded albums and I don’t think that one can make a brilliant album better, but fortunately in this case the result is pretty cool. The four girls did not forget the spirit of their old compositions and they still have the energy to play them like they did in the good old times. The sound is good and I’m really surprised because the new production really sounds authentic and not too modern. "Hit And Run Revisited" sounds more punching, more dynamic than the original recording, which, in my humble opinion, already had a great sound. "Hit And Run Revisited" contains two bonus tracks, a cool re-recording of one of my fave GIRLSCHOOL songs ever ‘Demolition Boys’ (from the 1980 debut album "Demolition") and an alternate version of ‘Hit And Run’ with Doro on vocals. I prefer the other version cause Doro’s voice didn’t fit very well. Anyway, it’s up to you to decide if you need a classic album re-recorded or not. I really can recommend the new version cause it definitely kicks major ass. www.girlschool.co.uk, www.udr-music.com