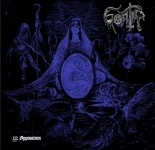 Hailing from Nuremberg, Germany, the Black / Death Metal three-piece GOATH returns with their second album "II: Opposition", again through Ván Records. The debut "Luciferian Goath Ritual", released only one year ago, had disclosed a band that worships the pioneers of Black and Death Metal from around 1988 to 1998. I can maybe recognize some of their influences like ACHERON, NECROPHOBIC and MAYHEM, but they surely added more elements. After an initial listening, this new chapter of the German act becomes more and more enjoyable. There are a lot a very good riffs, both brutal and catchy, as in ‘Born Of Fornication’, and the whole songwriting works considerably better than on the previous album. The traditional Black Metal wrath is balanced with bewitching mid-tempo slowdowns and atmospheric breaks. The double attack on vocals by Goathammer and Muerte is strong, their alternating screams and howls add dynamics to the blasphemous lyrics. The drumming is powerful and well mixed. Songs like ‘Revenge’ or ‘Enraged And Possessed’ emanate pestilential stench and satanic visions, whereas ‘Myth Of Forgiveness’ incinerates any blessed trinket on your chest. GOATH is a band devoted to the Goat and their attitude turns out unconditioned. Even if there is room for improvement for the next works, these guys confirmed themselves as one of the most interesting acts from the German underground. If you’re follower of the Goat too, check www.facebook.com/goath666 and www.van-records.de