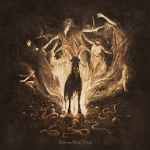 Viciously, the newest Bavarian Black / Death Metal outfit GOATH debuts with a full-length album not long after their self-entitled demo. If you’re still unaware of them, the trio plays an in-your-face form of Black Metal that is constantly fast within its rather simple riffs, delivered in utter intense manner from its offset. Along in their rush, however, GOATH brings a multitude of combined influences that keep me divided about their originality. The first song rips one’s ears off with an introduction that is pretty much a rawer MARDUK-ish riff and early MAYHEM’s vocals. Nothing innovative, but up until that point no one would care. The second track starts with the same fury, resembling even a less popular form of aggressive Death Metal commonly delivered by Chilean bands as COMMUNION, FORCE OF DARKNESS and the likes, but suddenly unfolds a really unexpected Death’n’Roll passage that turned me down a bit. Track 6, ‘Necromantic Ways’, goes straight into "De Mysteriis Dom Sathanas" vibe in every aspect, and despite being very enthused with that track, I don’t really know if they’re firing everywhere or if they actually want to be a broadly comprehensive band with all the atmosphere present here. The closing track ‘Under Death’s Shadow’ is by far the highlight of the album, structured more maturely and far more ominous than the other tracks. The backing-vocals are unnerving and captivating at the same time. So with limbs collected from an international mass grave, GOATH built their own Frankenstein of influences and it certainly comes alive in its fury. Personally, I enjoyed the album as an uncompromised listener, for it presents a great set of highly-enjoyable violent Metal. But said that, I believe this is not an album that will stand the test of time, for it lacks a bit of personality to do so. You can find more about them at www.facebook.com/goath666 and www.van-records.de