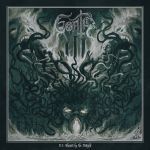 The name GOATH has a very good reputation in the German extreme Metal underground. And their recent third album “III: Shaped By The Unlight” proves that they earned their reputation for a good reason. It’s the intense and unique sound that makes GOATH something very special. Basically, the music that the three-piece created is deeply rooted in Black Metal. But that’s just a part of what GOATH are all about. On the one hand, they can’t be put in a certain box, as the spirit of the songs presented on “III: Shaped By The Unlight” is nourished by very varying bands like SECRETS OF THE MOON, EMPEROR, DISSECTION or SATYRICON, to name just a few. On the other hand, GOATH pass the border between Black and Death Metal more than once, reminding me in these moments of bands like ARROGANZ or darker MORBID ANGEL. This Death Metal edge adds a lot of aggression, especially on the short and rabidly raging songs like ‘Pretending To Serve While Raping’, ‘Smoltification’ or the title track ‘Shaped By The Unlight’. But the real strength of GOATH are the more atmospheric and abysmally dark songs like ‘Epitome Of Perpetual Rage’ or ‘Clitless Loyalty’, that both are interspersed with aggressive parts. And the final double pack of ‘Perception’ and ‘Impregnated With Black Fire’ turns out to be a real nightmarish ride through the chasms of darkness and depravity. Here it takes effect that GOATH are blessed with two vocalists who know how to vary their voices in order to change the mood of a song. Especially ‘Impregnated With Black Fire’ is a really sinister trip to the depths of the mind. Bands that take the “best of both worlds” to create something unique and huge are extremely rare and therefore need a lot of praise. GOATH are one of them. Visit them at www.facebook.com/goath666 and even more their dedicated label at www.van-records.com