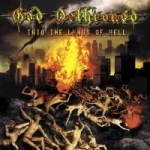 Finally my favorite Dutchmen are back with a new album. Somebody already asked me: “What’s it like? Like “Ravenous” or which album?” Well, I’d say: it’s another step into the future without a change of style. The opening title track is a midtempo hymn that makes me grab my air guitar. Track no. 2, ‘The Warcult’, seems to take the same direction but becomes a blast song that proves Henri and Co. having found a fitting drummer in Arien van Weesenbeck. Can be downloaded from the band’s website. ‘Enemy Of The State’ quotes MORBID ANGEL a bit and ‘Soul Sweeper’ even starts with an Azagthoth-style riff as heavy as an elephant’s ass culminating into one of those typical GOD DETHRONED melody parts where you can hear me play the third (air) guitar once again. ‘Slaughtering The Faithful’ is one hell of a Thrasher featuring some cool “whibble action” while dealing with today’s capitalist way of treating animals. ‘Subliminal’ is a perfect mix of a mid tempo hymn and a blaster. ‘The Tombstone’ is probably the darkest song on here, once again with a crazy Thrash lead (letting loose the horse). ‘Gods Of Terror’ finally is a mainly uptempo track played with anger and disgust. A song about the world leaders using the name of Christ for their own purposes. By the way: good idea to include the lyrics on the promo as well, they’re worth being read. Even the zombie topic offers neatly composed language. Hey teachers, what about interpreting GOD DETHRONED lyrics in school? ‘Into The Lungs Of Hell’ is an early highlight of the year and simply a brilliant album proving that progress doesn’t have to mean changing one’s style but also improvement. Watch out for GOD DETHRONED at summer festivals 2003 and at a club tour later on! Also available on vinyl. Furthermore, there will be a special limited bonus CD together with “Into The Lungs Of Hell” containing rare live songs and all the videoclips GOD DETHRONED made so far. www.goddethroned.com/