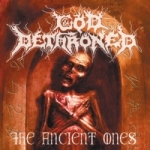 A re-release of a very old compilation recording of the Dutch band GOD DETHRONED. Including demo songs, songs from compilations and live tracks. I like some albums by this band, and in fact they have been quite consistent in their discography, but to tell you the truth, only if you are a completist of the band, I see really no more use for this compilation. The first 3 songs are from their demo, and to be honest it would be a good idea just to put the whole demo on CD and avoid some live songs. The music style of the band has not changed that much, some sort of technical high speed Death Metal, similar to early MORBID ANGEL, IMMOLATION and some touches of DEICIDE. The demo song sounds rawer and more primitive, and the vocal delivery is a bit rougher than what on later albums would be done. The live part is OK for what it is. Again this is an exact replica of the compilation released by Cold Blood Industries in 2000. If you missed it the first time, this reissue will work. If you again, missed it the first time, you can still miss it and surely nothing will happen. Still, I can appreciate what Vic Records is doing – hey, they re-released TORCHURE, a killer band!) so for those into Metal anthropology, look no further with the label. Still, some relics must be to your taste or likes, but at least they are there. www.facebook.com/goddethronedofficial, www.vicrecords.com