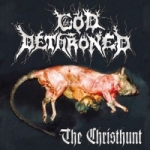 The name GOD DETHRONED does not need any further introduction. Nine full-length outputs are listed in the discography of the Dutch based band with Henry Sattler being the only founding member active on all releases. My first encouter with the band was back in 1996, when they aroused my attention by releasing "The Grand Grimoire". As usually, when I discover a new band, I checked out the previous releases and as far as I can remember "The Christhunt" did not convince me 18 years ago. Although there are good songs like ‘Necromagnon’, ‘Hordes Of Lucifer’ and ‘Infernal Sights Of A Bloody Dawn (Morbid Rites)’ the mix between Thrash and Death Metal sounded just premature and primitive. The band did a video for ‘Necromagnon’ and it was banned by some TV stations. But the reason was not rather the video itself (a fairly unspectacular one) than the band’s name and the explicit anti-christian concept. In 2014 one does not have to worry about TV stations and suchlike because we got the world wide web. And although many things have changed during the past 18 years, my opinion regarding GOD DETHRONED’s debut does not. 18 years are a long time, back then VOICES FROM THE DARKSIDE was available as printed A4 size magazine, limited to 1.000 copies. Bands like ARCH ENEMY, DESASTER, DARK FUNERAL, PURGATORY, SETHERIAL released their debuts, EDGE OF SANITY surprised the the metal world by releasing "Crimson". Just one song – with an total playing time of 40 minutes. Another surprise that year was the Easter egg like cover of MONSTROSITY’s "Millenium". IMMOLATION and IN FLAMES released their second full-lengths. MORTICIAN were "Hacked Up For Barbecue", whereas DYING FETUS tried "Purification Through Violence". MORBID ANGEL continued releasing album with titles in alphabetical order with the letter "E", namely the live-album "Entangled In Chaos". NAPALM DEATH stretched the patience of Grindcore fans worldwide with an output like "Diatribes", in contrast to CANNIBAL CORPSE, who stayed "Vile" as usual. And, not to forget, the year 1996 saw the first CD release (LUNAR AURORA – "Weltengänger") by the small German label Voices Productions, run by Frank Stöver himself. To sum it up: this release makes only sense for those who are longing to complete their collection. More info at: www.facebook.com/goddethronedofficial, www.vicrecords.com