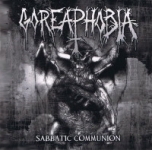 “There have been rumors that GOREAPHOBIA have broken up. This is not true! However Chris Gamble, their vocalist, has left the band… GOREAPHOBIA have released a new two song demo for promotional purposes and fans alike…” These quotes are taken from an old flyer that the band used to spread around at the time when the two songs that appear on this vinyl 7″ EP originally got released. Well, from what I understood, Chris Gamble was still part of GOREAPHOBIA when the band entered the studio in 1992, but the rest of the line-up had nothing really to do with the original band anymore. Apart from Chris (on bass / vocals) GOREAPHOBIA at that time featured a guy named Kenneth Masteller on drums, John Arcucci on lead guitar / synthesizers (who, if the rumors are true, did not play on this recording though) and Spencer Murphy (nowadays owner of Metal War Productions and a member of the very cool SACRIFICIAL BLOOD) on rhythm guitar. I have no idea why both tracks weren’t already included on the Necroharmonic Productions “Vile Beast Of Abomination” compilation CD (probably because it isn’t the original line-up?!), but hey – this is also a cool item now, so I certainly won’t complain. Tarot Productions definitely did a great job on the whole packaging (it even comes with an innersleeve and additional lyric sheet), it is limited to 500 copies and was pressed on very heavy, clear vinyl. Musically both songs (‘Sabbatic Communion’ and ‘Orcus Will Reign’) were a little bit different from the wellknown old school Death Metal style that the band had been known for as they were longer, a bit more moody (yet very heavy and raw) and you could hear Chris’ increased love for Black Metal already in the way he delivered his vocals (he transformed into Mezzadurus and founded BLOOD STORM right after he left GOREAPHOBIA). In a recently issued press release the label wrote that “this EP features pre-production studio tracks intended for the “Conqueror Of Thorns” album…” – an album that unfortunately never materialized either due to the ongoing line-up problems that GOREAPHOBIA always had to deal with throughout their career. What a pity… www.tarotproductions.com, www.goreaphobia.com, www.myspace.com/goreaphobia