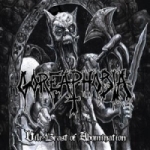 It’s so cool to have these guys back in full force again. After a rather half-assed reunion a couple of years ago with a line-up that by no means did justice to the true GOREAPHOBIA legacy, original members Chris Gamble (bass / vocals), Craig Smilowski (drums), Alex Bouks and Henny Piotrowski (guitars) finally got together again and musically continue on exactly where they left off in the early 90s. Unfortunately this twelve track CD still ain’t the band’s long overdue debut full length (they never managed to record one before they originally parted ways), but a compilation of their most popular studio recordings (the “Omen Of Masochism” EP and “Morbidious Pathology” demo / 7″), plus four new studio recordings (‘Cremate In Hate’, ‘Wraith Reaper’, ‘Chronic Blood Larva’ and ‘Creator Chaos’), as well as three live tracks (‘Devious Regordation’, ‘Chronic Blood Larva’ and ‘Cremate In Hate’). Longtime followers of this Philadelphia deathsquad will certainly notice that the new studio material consists of some classic tunes that GOREAPHOBIA already played in their very early days, but never managed to record properly in a studio. The cool thing is: the band managed to pull them off in the good old style and didn’t drastically re-write / re-arrange them in order to fit into current musical trends. This is still classic old school Death Metal of the highest quality with a strong 90s vibe to it. Unfortunately something must’ve gone wrong during the transfer of the old demo / EP songs from tape to CD as the sound quality (which wasn’t the best anyway) has become a bit worse on here. Especially in the case of the “Morbidious Pathology” material, which seems to lack a bit of the deep frequencies now. Too bad, really… At least the packaging is amazing: a killer Drew Elliot coverart in the style of the other GOREAPHOBIA releases, a massive, 20-pages fat boolet with the most in-depth band history I’ve probably ever read (compiled by an old friend of the band), most of the lyrics, plus lots of old concert flyers and pics. So, all in all an essential purchase for all you old school Death Metal lunatics out there! More info you may find at: www.goreaphobia.com, www.necroharmonic.com