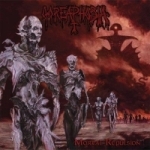 Now this is impressive – although, not entirely unexpected considering that every member of GOREAPHOBIA has stayed active in Metal since the band originally dissolved in the mid 90s. All of GOREAPHOBIA’s tracks were recently made available on a compilation disc, but this is the first time anything new has seen the light of day since 2001 with the “Return Of The Shadowlands” promo. Needless to say, this long overdue debut from GOREAPHOBIA is a joyous occaision. Unlike most albums, this one is made in such a way as to be taken easily as a whole instead of having four or five stand-out tracks. All the songs, though some are certainly better than others, are nevertheless part of a cryptic whole. Attentive listeners will note that there is a degree of fuzziness to the record, but it does little to diminish the album’s power. In fact, fans of newer PROFANATICA should adore this record for that very fact alone. GOREAPHOBIA bludgen, slither, spit, and morbidly serenade. For more info check out www.myspace.com/goreaphobia