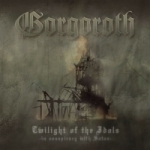 GORGOROTH
Twilight Of The Idols - In Conspiracy With Satan
(Nuclear Blast Records)
32:37min

I don’t get this. The album was finished in January 2003, and is released now as we’re speaking August 2003. Oh well, should probably avoid label business in the future… “Twilight Of The Idols” is a violent album. Black Metal has been performed by too many bands, with too many different visions of what Black Metal really is. Gorgoroth have never been a band I have understood, but I have always found their albums violent. And this new longplayer is, as already said, violent. And so simple. Just as their twelve page utterly boring booklet, where eight of the pages just show the four band members. Could it be the lyrics are too Satanic for Nuclear Blast’s own good? I mean, a track like ‘Procreating Satan’ must have a nice lyric… However, and this is the main point, can you stand Gorgoroth’s violent music with Gaahl’s incredibly insane vocal duties? If you like Black Metal the obvious answer is ‘yes’. “Twilight Of The Idols” is truly a conspiracy with Satan. It’s what Black Metal is all about, namely violence and hatred. The tracks are simple but still they contain so much feeling. Violent feelings. Personally I’m not a violent person, but this album really makes me think vicious thoughts. I blame it on the sound and Gaahl’s extreme vocals. And, when Gorgoroth includes such parts as the ending of ‘Procreating Satan’ and the mid-section of ‘Forces Of Satan Storms’ I can’t do anything but nod in respect. In addition, and I don’t know if it’s a conscious choice or a twist of fate, but ‘Exit – Through Carved Stones’ is, at least to me, a tribute to Bathory from their “Under A Black Mark” – era. And I, if we can use such a word in this context, love the track. While ‘Of Ice And Movement…’ gives me the creeps from DarkThrone’s ‘Natassja In Eternal Sleep’. Too bad the last three minutes of the already short album are totally waste of time. To me, the album ends after 29 minutes, 29 minutes of severe music.