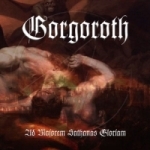 As the original release of this album was already reviewed by Mario somewhere else on these pages, and I more or less agree with what he wrote, I won’t waste too much of your (probably rather limited) time on the musical side of this re-release anymore. Just let me tell you that I’m heavily impressed by the evolution that GORGOROTH went through over the years, from a rather immature and quite sloppy sounding grim Black Metal horde to an established force, that still sticks to their grim roots, yet knows how to execute their material way better nowadays. "Ad Majorem Sathanas Gloriam" is an album that many other Norwegian Black Metal acts most certainly would never ever have recorded anymore at this point of their career… you may blame it on "musical progression" or something. But GORGOROTH prove that you can easily become better musicians without leaving your original musical path and still succeed with it! This re-release comes as a digipak with a dark green, better recognizable version of the coverartwork, Frost is mentioned as the session drummer in the booklet this time and most important of all: there’s a bonus DVD with the band’s first video for ‘Carving A Giant’ (plus the making of it) included. I highly appreciate this decision as the label could easily have decided for the easier way, by adding the video part to the regular CD, which would have resulted in the fact that you could only watch it on your PC. The video itself perfectly captures the grim dark attitude of the band, with lots of blood, fire, nudity and overall blashemy (based on their rather "controversial" live show in Poland a couple of years ago) and by no means comes across ridiculous (as opposed to many other Black Metal videos these days). The "making of" features short interviews with Ghaal, King and the producer of the video, so all in all pretty entertaining. If you haven’t bought the regular version of "Ad Majorem Sathanas Gloriam" yet (or consider yourself a die hard GORGOROTH fan), make sure to go for it! Great one! www.regainrecords.com 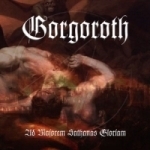 Everytime GORGOROTH releases anything they take the world by storm, isn’t it? It is futile to deny their overall impact during the last decade in the Black Metal genre which refuses to go away as fast as the Death Metal explosion around ’90-’91. I’ve never ever been a huge fan of GORGOROTH and in fact it took me several years to "learn" how, when and were listen their albums from beginning to end. The raw Black Metal in general does not have the hateful and extremely cryptic feel this band transmit with their songs. Just sit back with a beer and play anything at least remotely related to this genre and then play a whole GORGOROTH album from start to finish…your life will never be the same! This time around the have tweaked their compositions to keep the whole thing interesting and innovative in their very own style. Their evil brand of Black Metal is still fiercely executed just like in their glorious past but incorporating additional elements of the whole Metal spectrum that many will get surprised with. This is a prime example that a radical band like GORGOROTH don’t have to be necessarily tied to a formula on every album and at the same time remain faithful to their ideals. Despite being surrounded by ridiculous propangada shifted towards the personal life of the band members instead of the music itself they have remained focused and managed to release a very solid Black Metal masterpiece that I’m pretty sure will be hailed as a classic of the genre in years to come. The only weak spot of the whole thing is to be really short in duration, are they the DEICIDE of Black Metal or what? If you want something to spin regularly on your player and not wasting the money on music-to-be-shelved crap get you lazy ass to the nearest Metal store & get this…prosperity and beauty for all! Visit their site at: www.gorgoroth.org.