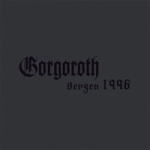 Hmm… this EP is a rather controversial one… just have a look at its playing time and you already know that the two featured live tracks ‘Revelation Of Doom’ (the opening track off "Under The Sign Of Hell") and ‘Ritual’ (from GORGOROTH’s debut full length "Pentagram") would’ve better been saved as bonus material for an upcoming GORGOROTH CD someday… They originally were released as the limited edition (666 copies) vinyl 7"EP "The Last Tormentor", recorded live in Bergen / Norway on May 23, 1996 with the old GORGOROTH line-up Ares (bass), Pest (vocals), Grim (drums) and Infernus (guitar). On the musical side of things let me tell you that the recording quality is pretty raw (which of course shouldn’t be a problem for a Black Metal act), but it’s also easily recognizable that GORGOROTH were still rather immature players back then, especially the drumming sounds rather sloppy and I can’t help myself thinking that Pest didn’t really deliver actual lyrics here… So, unless you are a die hard fan of the band, you may as well ignore this release (it comes as a digipak CD, basically all in black with two live pictures included inside). www.regainrecords.com