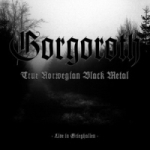 So here it is finally, the album during whose recording the band GORGOROTH split up, or more correctly, split into two parts. While in my opinion there is only one legitimate party to continue with that name – Infernus’ part of course – this is nevertheless a rather pointless release, of value only for completists. The album was recorded last autumn in the famous Grieghallen, thus the title, with the bass being re-recorded by Infernus in 2008 which does not even make it a “live” album any longer. It contains eight old songs which still make up a great part of GORGOROTH’s live set. Despite the sound being a bit too clean, it proves a couple things very openly: Garghuf does in no way reach the class of neither Frost nor Grim, and the same can be said about Gaahl. During the old songs he is nowhere close to the quality of Pest or Hat (who originally sang five of the eight songs). Strangely enough he nevertheless tries a lot to sound like them. If this was not enough it also shows very openly that the best tracks GORGOROTH ever recorded are to be found on the first four albums when Infernus still had the major impact on the song writing. Generally speaking, this is an album for fans and fans only, everyone else should – until the release of the next album by Infernus – stick to the other GORGOROTH outputs out there, or the new Live-DVD respectively. www.gorgoroth.info, www.regainrecords.com