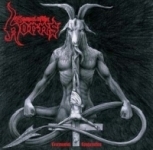 If you ask me where the best Black / Thrash comes from I will answer “Australia, Germany and South America”. If you say “Australia sounds cool, what bands can you recommend?”. I will answer “D666 are the masters but GOSPEL OF THE HORNS are great, too!” After two albums, several really strong EPs now after a period of 5 years another sign of evil entitled “Ceremonial Conjuration” has been etched in the band’s bullet belt. Changes are untraceable, this 18 min EP sounds just like “Eve Of The Conqueror” or “A Call To Arms” with a bit more punching production and I have nothing against a sense of continuation. Howitzer’s vocals snarl as vicious as ever, the riffs and rhythm section work tightly and groove especially well to some beers. My personal favorite track is the mid-tempo stomper ‘Awakening’, followed closely by ‘Sorcery & Blood’ and the rocking ‘Conquering Self’ whereas the 2min something title-track actually turned out a bit disappointing due to storming with menace but failing to leave any toxic trace in my ear canals. The closing GOATLORD (US) cover however turned out nicely and gets your head banging immediately, nice one! Overall, it’s all the same down in Australia and you know what: I like it that way. These filthy leather‘n’spikes wearing koalas remain a fine purveyor of Black / Thrash and now that they’ve proven to be still a force to be reckoned with, get a full album done and stop teasing us with such short appetizers! Additionally, an extra “Horns Up” for the great cover! www.invictusproductions.net