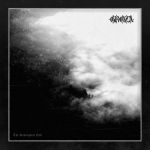 GROZA is a Black Metal horde hailing from Bavaria in South Germany. Active since 2016, the band returns now with their second full-length “The Redemptive End”, I guess named after the well-known first album from MGŁA. I missed out their debut, but wanted to check them out for a longer time, so here was my chance and already the opener ‘Sunken In Styx – Part I: Submersion’ starts very promising, even though very quiet. With spoken passages and stringed guitar tunes it prepares the listener for what will come with ‘Sunken In Styx – Part II: Descent’, a hell of a track. Surely heavily inspired by the mentioned Polish warriors MGŁA. The quality of the material is on the same level. Intense vocals, fantastic drum work, shredding guitars and good songwriting. Yes, the influence is there, but to be honest, I enjoy this album more than “Age Of Excuse” as that one sounded constrained, while “The Redemptive End” sounds unused and fresh. I guess the difference lies in the pressure form outside. ‘Elegance Of Irony’ starts far more melodic with a small mid 90s Gothic touch and is presented in midtempo and keeps the melodic path going, which is surprising but sounds very good and varies their style a lot. And again, the drumming is outstanding and gets even more intense when the track turns black and the Heavy Metal inspired lead guitar kills everything. With ‘The Redemptive End’ GROZA are back in black. Faster drumming, intense vocals between caws and screams and fast and sharp riffing. Especially the groove of the track is damn heavy and the small break in the middle is well placed. In the middle, they slow down again and a Prog orientated side appears with silent tunes, classic guitar tunes and a warm melodic side appears before it returns to Black Metal. ‘Nil’ is a bit weaker than the tracks before but still not bad or boring. The band just has put their own bar pretty high before. ‘Homewards’ is a strange thing as it really sounds like the end of a journey. Intense melodies which really gave me goosebumps in the beginning. A very intense track with a damn thick atmosphere and simply brilliant instrumentation. This album really is a journey and definitely worth to check as the guys from Bavaria can stand the international comparison and this album will lift them up and hopefully brings them the deserved attention. For more information, check one oft he following sources: www.facebook.com/grozaband, www.facebook.com/aoprecs