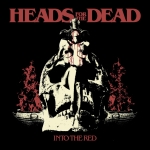 HEADS FOR THE DEAD
Into The Red
(Transcending Obscurity)
46:38min

About two and a half years after their debut album “Serpent’s Curse”, the Swedish-Swabian connection HEADS FOR THE DEAD is back with a second album. “Into The Red” is the follow-up to “Serpent’s Curse” and makes the band even more international. The Death Metal jack of all trades Jonny Pettersson and his German vocal partner in crime Ralf Hauber were joined by another restless musician. Ed Warby, best known for his superb drumming in GOREFEST and HAIL OF BULLETS, among others, entered the unholy union of horror. And his addition is the final touch to the sound of HEADS FOR THE DEAD. Musically, the band follows the chosen path and presents us a variety of Death Metal songs that dwell deep in the history of the genre and sometimes even not only scratches the borders, but expands them a little more. Especially the already blurred borders between Crust and D-Beat Punk on the one hand and Death Metal on the other are often crossed in both directions. No less than five of the twelve songs on “Into The Read” don’t exceed the three minutes mark and are driven by variable D-Beat drumming, like ‘Night Ripping Terror’ and the great sick and terrorizing ‘The Midnight Resistance’ with its distinctive Crustcore feeling. Another fine example is ‘The Coffin Scratcher’ that combines Crust with a Horrorpunk vibe. And HEADS FOR THE DEAD even dare to touch old fashioned Grindcore with ‘The Revenant’ that sounds like REPULSION recorded something fresh. The D-Beat massacre ‘The Prophecy Fulfilled’ comes along with a nice slowly grinding break. On the other hand there are some overall more slow paced and complex tunes on “Into The Red” as a counterweight. The opening title track is a pretty complex Death Metal tune with the overall haunting feeling of a horror movie. Doom parts meet up tempo parts and sick vocals from Haubersson, who even presents some lines in German. And ‘At The Dead Of Night’ is a D-Beat driven nasty Death Metal song with great soloing. Another rusty and bloody nail in the coffin is ‘The Seance’, where ASPHYX meet “Domination” era MORBID ANGEL. These vibes are also present in ‘Creatures Of The Monolith’ that even roams in domains of Funeral Doom. But the absolute highlight of this fantastic album is ‘Multi Morbid Maniac’. A creepy intro piece leads into an ASPHYX styled beat, sick keyboards and miscreant breaks like barbed nails guide the listener through this nasty song. What a monster, full of deviousness! I just love this sick monstrosity! As it was on the debut, “Into The Red” also has an unexpected cover song to offer. This time, HEADS FOR THE DEAD have laid their hands on ‘Transilvanian Hunger’ from DARKTHRONE. And it’s a long shot, but the result is not disappointing, as the keyboards are placed very effectively. Yet “Into The Red” wouldn’t have missed anything without this cover. The overall impression of the album is still fantastic. And all collector nerds get some valuable stuff as well, since both CD and vinyl are available in limited wooden boxes. So go and check out HEADS FOR THE DEAD at www.facebook.com/headsforthedead and their label at www.tometal.com or https://transcendingobscurity.bandcamp.com